So you're dying. decaying.
rather self-reflexively...

does it make the end profound or just plain pathetic?
perhaps sad.
Posted by Took at 1:17 AM 2 comments: 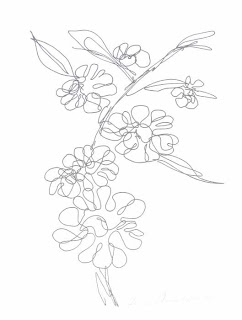 "Why is it we want to memorialize ourselves? Even while we're still alive. We wish to assert our existence, like dogs peeing on fire hydrants."

For you who lie silent tonight 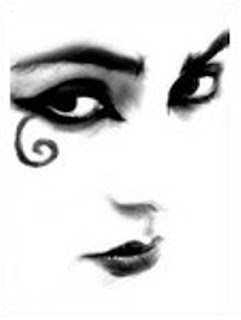 I will not return.

will lull the world, under beams of its solitary moon.

My body will not be there,

and through the wide-open window,

a refreshing breeze will come looking for my soul.

I don't know if any await the end of my double absence,

or who will kiss my memory amidst caresses and weeping.

But, there will be stars and flowers,

there will be sighs and hopes,

and love in the avenues in the shadows of the trees.

And that piano will be playing as in this untroubled night,

and no one there to listen,

by my window frame.

All of a summer's day 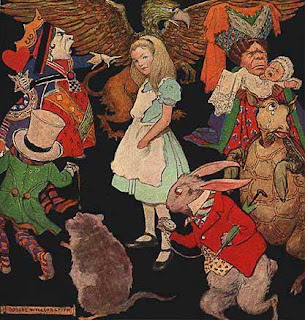 something reminded me of the 'Bohemian Rhapsody'

`You may not have lived much under the sea--' (`I haven't,' said Alice)-- `and perhaps you were never even introduced to a lobster--' (Alice began to say `I once tasted--' but checked herself hastily, and said `No, never') `--so you can have no idea what a delightful thing a Lobster Quadrille is!'
`No, indeed,' said Alice. `What sort of a dance is it?'
`Why,' said the Gryphon, `you first form into a line along the sea-shore--'
`Two lines!' cried the Mock Turtle. `Seals, turtles, salmon, and so on; then, when you've cleared all the jelly-fish out of the way--'
`That generally takes some time,' interrupted the Gryphon.
`--you advance twice--'
`Each with a lobster as a partner!' cried the Gryphon.
`Of course,' the Mock Turtle said: `advance twice, set to partners--'
`--change lobsters, and retire in same order,' continued the Gryphon.
`Then, you know,' the Mock Turtle went on, `you throw the--'
`The lobsters!' shouted the Gryphon, with a bound into the air.
`--as far out to sea as you can--'
`Swim after them!' screamed the Gryphon.
`Turn a somersault in the sea!' cried the Mock Turtle, capering wildly about.
`Change lobster's again!' yelled the Gryphon at the top of its voice.
`Back to land again, and that's all the first figure,' said the Mock Turtle, suddenly dropping his
voice; and the two creatures, who had been jumping about like mad things all this time, sat down again very sadly and quietly, and looked at Alice.
`It must be a very pretty dance'...
Posted by Took at 9:45 PM 3 comments:

Took
...the past tense of Take.